This painting is inspired by the majestic view from Cueva Ventana, a natural cave in the north side of Puerto Rico, on the karso zone. In this part of the island, limestone is the main rock and, throughout the ages, the abundant water underneath as well as rain have sipped into the rock, forming numerous caves.

I drew from the myth of Orpheus delivering his beloved Eurydice from Hades. Most people know the story which in summary tells how Eurydice was fatally bitten by a snake and how her husband Orpheus, filled with grief, entered the realm of Hades through a cave, tamed the monsters of Hell with the use of his lyre and his gift of music, and pleaded for the god of the underworld to allow her to return to the realm of the living. Orpheus almost succeeded in his attempt at delivering Eurydice, but once at the opening of the cave, he turned around to gaze on her face, and because Eurydice had not yet reached the daylight, vanished back into the underworld.

The myth of Orpheus and Eurydice has many interpretations, but I’m not depicting that story in my painting of the landscape of Cueva Ventana. In my visual narrative, Orpheus abandoned what is precious to him, his muse Eurydice and his lyre, and turned into a bird to freely soar high above the landscape.

I can’t tell what made Orpheus leave Eurydice along with his lyre at Cueva Ventana. Perhaps it was a deep disillusionment, one of those painful moments we sometimes experience where we question the reality of our beliefs and ideals. She lies there inert, and even the unplayed lyre is no longer of value without the master player. Orpheus flies afar, transformed into a bird. A car is seen below crossing the bridge across the river, oblivious to what is happening at the window of the cave high above in the face of the cliff. There is a glimmer of hope in the sight of the protruding branches, a proof that life clings even to the most unhappy circumstances. 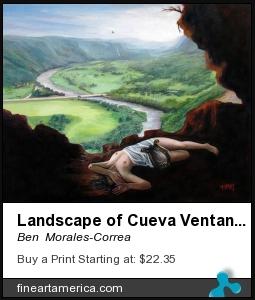 Ben Morales-Correa is a fine artist working in both abstract and figurative styles.
He started developing his artistic skills at an early age through the teachings of his father, a master graphic artist, illustrator and printer. During the late 70s and early 80s, he moved to San Francisco, California to pursue studies in fine arts and communications arts. At the same time, Morales-Correa worked in public mural art projects and graphic design studios.
In 1982, he was granted a summer scholarship by the San Francisco Academy of Arts, and was awarded First Prize in Photography by Archaeology Magazine of New York in 1996. In 1992, Morales-Correa established an atelier under the name Mythos, where he created and developed innovative techniques in the manufacturing of fine ancient Egyptian painting replicas. These works have been acquired by collectors, teachers and Egyptian art enthusiasts in the United States.
A substantial quantity of the artist's output have been carefully digitalized and are available as museum quality high resolution prints on archival paper.
Loading Comments...
%d bloggers like this: